Tomb Raider Definitive Edition for PS4 and Xbox One 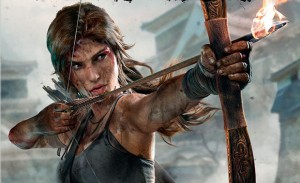 A little more than just a new console port of last year’s Lara Croft release, Square Enix has done sterling work in brining this title to both the PS4 and Xbox One with a little help from developers United Front and Nixxes.

So, what’s the deal? Well, the game is set on a Pacific island which you need to fight/excavate(!) your way across. Lara comes across various enemies and inhospitable terrain. It’s all pretty standard Tomb Raider to be honest. Fast paced action with cinematic flair – an almost interactive movie.

OK, so gameplay-wise, what do we have here then? Well, it turns out to be a mix of both on the rails scripted action with the addition of a few choices which you yourself can make to adjust outcomes. Once you’ve been through certain areas you always have the option to go back and explore in a little more depth, without people wanting to kill you for a change. This is useful for finding items that may have been overlooked first time around.

You can of course just barrel on through but it makes sense to take a step back once in a while and go exploring for the hidden tombs and what they may contain.

The Graphics and Sound

As with all next-gen console titles, this ain’t loose change. Is it worth paying the extra for if you’ve still got an old console or PC capable of playing it? Well, you do get enhanced graphics on display with smooth 1080p resolutions banging out at between 30-60 fps depending on your choice of console. What you’re getting here is more complex textures, more objects being animated and better lighting effects. It does look very good indeed.

Bottom line: if you’ve got a next gen console and haven’t played the older version then this is definitely worth a look.